1978-2002 – The Settlers Inn Ltd. began when a group of friends, including Jeanne Genzlinger, opened a restaurant in Hawley, coincidentally  on Jeanne’s 27th birthday in December 1978. The little restaurant in the former Eddy Hotel became wildly popular and the group was encouraged to move to a larger venue. The larger venue was the old White Deer Inn on the corner of Route 6 across from Bingham Park. On November 15, 1980, The Genzlinger family jumped in and the first generation, Grant’s parents, Bob and Muriel Genzlinger became the majority owners of the business along with Jeanne and Grant and several other investors including friends and family. The 1980’s saw much growth and improvements in the restoration and revitalization of the structure and steady growth in business and reputation. In the late 1980’s Marcia Dunsmore joined the business and together with Grant Genzlinger this mighty duo put the inn on the map as a fine dining farm to table establishment. Bob and Muriel Genzlinger retired in the mid 1990’s and the remaining trio of Jeanne, Grant and Marcia continued building the successful business which was now known as a AAA four diamond award winning property.  Marcia retired in 2003 and Jeanne and Grant continued and expanded the business.

2002-2012 – In 2002 the Genzlinger’s purchased Sayre Mansion, a 19 room bed and breakfast inn,  in Bethlehem, Pennsylvania and put the Settlers footprint in a new location with this historic mansion dating from 1858. It became appararant that the couple had a passion and flair for combining hospitality with historic preservation. In 2 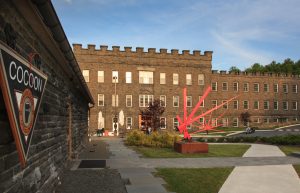 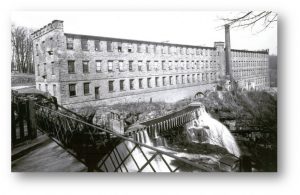 005 the Sayre Mansion Carriage house was added to the portfolio along with the next generation of Genzlinger’s in the management team. Carrie Genzlinger Ohlandt came on board to manage the Bethlehem properties.  2008 was a pivotal year for the family business. In addition to hospitality, community revitalization and real estate development was added to the equation when family members Justin Genzlinger and John Shuman purchased the Hawley Silk Mill along with Jeanne and Grant and Tony Waldron as Stakeholders. Jeanne and Grant took on the operation of Cocoon Coffee House in 2009 adding another dining venue under Settlers Inn.  In 2010 the property now known as Ledges Hotel along with Glass restaurant was added to the Genzlinger family of businesses with son Justin Genzlinger now taking an active role in the ownership and management of multiple venues and real estate development in the Hawley area including the Hawley Medical Center, Hawley Silk Mill and Ledges Hotel. In 2012 Justin relocated to Hawley and became the CEO and managing partner in these venues while Jeanne and Grant continued with Settlers Inn and Sayre Mansion. 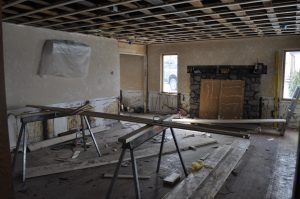 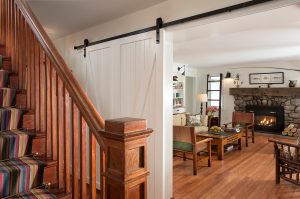 2012- 2017 – 2015 was another busy year for the Genzlinger family. Settlers Hospitality Group formally became the parent group of all the lodging properties, restaurants, and associated businesses in the family portfolio. In addition to lodging and dining the retail businesses of Art on the Edge, The Potting Shed. Lake Region Fitness, a state of the art fitness center also came under the banner of the organization. In 2015 Jeanne and Grant retired from day to day operations at the properties and founded Root Hospitality, the consulting arm of the business. They continue today in that role and serve as co-chairs of the board.  2016 saw another large expansion of Settlers Hospitality Group with the purchase of Ehrhardt’s Resort on Lake Wallenpaupack. Reverting to it’s original name, Silver Birches, the entire property underwent a major restoration including the 1929 original inn and cottages and updating and expanding the restaurant with a new look, ambience and name – The Dock on Wallenpaupack. The theme of this vintage resort is “everything old is new again”. With the addition of Silver Birches, Settlers Hospitality Group now included three lodging properties totaling approximately 100 keys and four 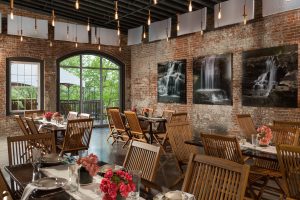 restaurants along with several special event facilities including The Waterfront at Silver Birches and The Undercroft at Settlers Inn. However this left a gap for special events in the beautiful Paupack River Gorge at Ledges Hotel so 2017 saw the addition of The Boiler Room and outdoor Terrace as an additional event venue for the hospitality group. Also in 2017 a large commercial bakery was added at the Hawley Silk Mill to serve the hospitality and retail needs. 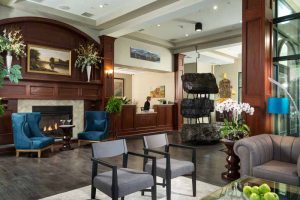 At a time when much of the world was on pause, 2020 brought a flurry of activity to Settlers Hospitality. It began with the acquisition of The Retreat at Millbrook Cove from Tanglwood in June 2020.  The vacation condos on the western shore of Lake Wallenpaupack operate as a satellite location of Silver Birches. There are eight units in all offering one and two-bedroom suites. Settlers Hospitality also signed a management contract to oversee Lakeside Cabins. The new construction cabins are located in Tafton and managed as part of Silver Birches. Settlers Hospitality diversified its venue offerings through partnerships with other local businesses in 2020. An arrangement with Camp Oneka, the historic girls summer camp located on Fairview Lake, has Settlers Hospitality acting as event coordinator and caterer for weddings corporate retreats, reunions and more at the authentic Adirondack-style camp. Blu Stone Caterers made its debut in 2020. The division of Settlers Hospitality was created to service off-site events. Grant’s Woods was a major addition to The Settles Inn in 2020. Located between the Inn’s 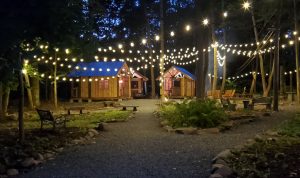